I found a picture of one of the bookcases in the now gone Comics Room at my parents’ house on Dean Road. The shelves are crowded with eighteen surprisingly neat piles of our treasured books, most with covers torn or corners lost, all pored over, memorized, and loved. The picture is of the DC side, given over to Superman, Batman, Flash etc. Not out of any lack of love, there are fewer titles represented than the Marvel bookcase across the room. So, this side also has my own personal Harvey collection – Sad Sack, Richie Rich, Little Dot, etc., books sporadically purchased in my younger days but read as frequently and loved just as greatly.

We never subscribed to comics that I remember. Every book on those shelves was hunted down for purchase, a labor of loyalty. Newsstands, five and dime stores, novelty stores, every new location we could find was interrogated for the welcome sight of a turning rack or a shelf of the magazines, standing primly in overlapping piles. In our early years, there was no such thing as a comics store, but the books were popular so the racks were ubiquitous, even if the selection from store to store may have been idiosyncratic. It often took us three or four stores to make sure we had the latest in all the titles we collected. But that was part of the thrill – a joy that all three of us siblings could agree on and share. A pursuit that even our frivolity averse parents did not mind. It was reading, after all, and they respected the written (and drawn) word above all things.

The books on the shelf have a bell curve of our interest and participation (like the giant box of baseball cards that I rescued from my parents’ house). There is a trickle from the early to mid 60s, followed by a flood from the turn of the decade, the height of the Silver Age. The vast majority of our books are from 1967 – 1972. In ’72, when we moved to Boston and created the legendary Comics Room, our interest was starting to wane, or perhaps it was our devotion to shared endeavor. Allison was in college. David had distanced a bit to fit in with his new classmates. Although we were given fair freedom to explore our new city, there were distance and convenience constraints that meant that we could no longer hunt out store after store. And perhaps the age of the comic book was starting to end. Our family still habituated bookstores and some, like the wonderful Paperback Booksmith in Coolidge Corner (still one of the best indy bookstores in the world) had a limited but satisfying selection, but the displays were harder to find.

Issues started to be missed. Titles were let go. The collections that we already had were still revered and read with frequency (in 2018 when I closed down the Dean Rd. house there were still piles of comics in each of our rooms), but the act of collecting had become less enthralling. Although I was able to keep some of my favorite titles going through high school, often by making semi-illicit sorties to a bookstore offering comics on “sinful” Charles Street (paying one of my classmates a dollar a time to accompany me), the bell was tolling. The last of our regular comic book purchases occurred in 1977 or 78.

The picture that I found includes so much more than its collection of fractals and pixels. Every pile on the shelf is familiar to me. Every torn cover or ruined corner. I can still hear the voices of the characters (“Groan, I should have known,” or “The gloves are off!”). I can still feel the electric thrill of grabbing a pile of comics to bring down to the table for one of our rare-treat reading meals. Or the dozy comfort of taking some of our printed friends down on a dreary, rainy day and basking in the familiar warmth of their company. 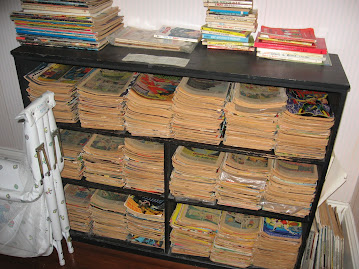